You are here
Home
>
About Us
>
genOway
>
Corporate overview

genOway (Euronext Growth: ALGEN) is a public company focused on the development of custom genetically-modified (GM) mouse, rat and cellular models. In addition to providing highly advanced technological solutions for transgenesis and model design, genOway offers interactive scientific consulting at every step of the process. genOway considers its interactive consulting an essential part of the design process. genOway utilizes its consultation services to better understand your specific research needs, objectives and goals as well as to help enhance the reliability of your in vivo and in vitro studies.

genOway generated more than 2000 genetically-modified models in the past 19 years while working with more than 170 Life Sciences companies and 380 academic institutes. Currently genOway collaborates with 17 of the Top 20 pharmaceutical companies worldwide and 11 universities from the Top 15 US National Ranking. 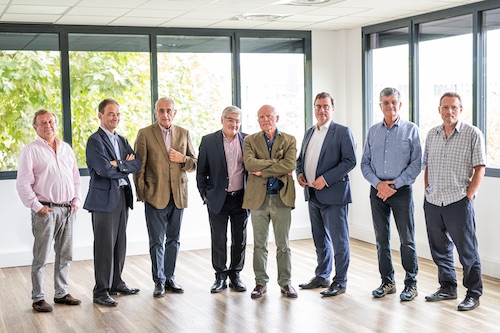 Christian Grenier - Chairman of the board

After graduating from ESCP and INSEAD, Christian Grenier began at McKinsey & Co as a stategy consultant. From 1987 onwards he successively lead 4 subsidiaries of the Rhone-Poulenc Aventis Group. He then co-founded the biotechnology company Urogène sold 7 years later to the Pierre Fabre Group. For 5 years he will then be leading the International Forum Biovision at Lyon gathering the major international leaders in the life sciences field (scientists, industrials or politicians) while being as well an operating partner at Advent International, a private equity firm in the pharma-chemistry industry.

Christian Grenier was Chairman of the Supervisory Board or Director of many biotechnology companies (Neorphys, Cytomix System, Watchfrog). He is currently board member of Delpharm.

French. Earned his Ph.D. at the Ecole Normale Supérieure de Lyon in Molecular and Cellular Biology in 1997. Worked for five years on animal models at the ENS where he produced the first model of hypothyroidism and co-founded the Transgenetic Center.

Andre Tartar, PharmD-PhD, is Professor at the Faculty of Pharmacy in Lille since 1981. He is in charge since 1998 of the training of the industrial pharmacists. He is the past president of the “Société de Chimie thérapeutique”. He chairs the scientific board of Paris Biotech Santé, the incubator for start-up companies in Paris. He is a consultant in preclinical research for several pharmaceutical and biotechnological companies (Ferring, Diverchim, Orphelia, Septeos…). From 1999 to 2004, he was director of Chemistry at the Ferring Research Institute in Chilworth. From 1996 to 1998, he was co-founder and CSO of CEREP, a public company specialised in HTS and HTOS technologies. From 1986 to 1996, he was the founder and chairman of the department of Bioorganic Chemistry at the Pasteur Institute of Lille. From 1982 to 1986, he was in charge of a CNRS research unit at the Faculty of Pharmacy in Lille specialized in peptides. During his career, he published more than 230 research papers in the fields of bioorganic and medicinal chemistry (Nature, Science, JACS, JOC, PNAS, J Exp Med...) and received numerous patents.

Laurent Fraisse earned his PhD in Biotechnology at the Institut National Polytechnique de Toulouse, France, and went on to hold various positions at Technical University Munich, Germany, and Lacq Research Center, France. For the next 10 years, he led a group at Sanofi-Aventis, successfully developing research strategies for tuberculosis, malaria and hospital-treated infections, before becoming research director and deputy head of the EIM (Exploratory and Internal Medicine International Department) global leadership team and member of the global Discovery Research Board at Sanofi, Toulouse, France. Since 2010, he has held leading positions at the Infectious Disease Therapeutic Strategic Unit at Sanofi, Toulouse, and served as Vice President of R&D and Global Head of the Infectious Diseases Therapeutic Area. In July 2018, he became Executive Vice President for Infectious Diseases R&D at Evotec, Lyon, France.

After graduating from l’École des Mines de Paris, and with a Master’s in Industrial Engineering from Stanford University, Patrick Blain spent most of his career at Renault, where he held various positions in production, marketing and commercial management. In 2005, he became Deputy Chief Executive Officer of Renault, and a member of the Executive Committee and Board of Directors of the Renault-Nissan alliance. From 2011 to 2015, he held several terms as president of both the International Organization of Automobile Manufacturers (OICA) and the Road Safety Foundation. He is currently a judge of the Paris Commercial Court, and president of the Automobile Commission of the Automobile Club de France (ACF).

Physician by training and with a Master’s degree in Law from the University of Lyon 3, Jean-Louis Menard developed and directed MAPI (the largest CRO in Lyon) from 1981 to 2017, when the company was sold to the Irish CRO Icon. He is currently president of EOLYS, which comprises five small- and medium-sized enterprises (SMEs), and he reinvests his money in SMEs with high potential, such as genOway, where he is shareholder and administrator, contributing his CRO expertise.

Raffy Kazandjian is currently a managing partner of UBT, a biotechnology consulting company, and manager of EuroMedical Instruments. With over 25 years of experience in the venture capital industry and biotechnology, he was the former president of CDC-INNOVATION, a venture capital fund affiliated with the CDC. During his career, he has made more than 70 investments in technology startups, and has held numerous mandates as a top-level manager of several technology companies or as a board member (e.g., Eyevensys, Meiogenix, Cellectis). He is a graduate of INSEAD (MBA in 1990), MIT (MS in 1985), and ENSCP / Chimie Paris-Tech (in 1983).

Olivier Charmeil is a graduate of HEC (École des Hautes Etudes Commerciales) and the Institut d'Etudes Politiques (IEP) in Paris, and currently oversees the General Medicine entity within the Sanofi Group. He started his career in the Mergers & Acquisitions department of the Banque de l’Union Européenne (European Union Bank), before joining Sanofi in 1994, and became a member of its Executive Committee in 2011, when he was appointed head of Sanofi Pasteur. He has held various positions within Sanofi, most recently as Head of China & Emerging Markets. In June 2020, he was appointed a member of the Board of Directors of the European Federation of Pharmaceutical Industries Associations. He is also a director of the France–China Committee.