You are here
Home
>
Commentary
>
Prime Editing: Immature, yet exciting

Since the discovery of the CRISPR/Cas9 system, the gene editing community has put a great amount of effort into improving the efficiency and predictability of double-strand-break (DSB) resolution. Indeed, Cas9 mediates DSBs that are subsequently repaired by one of the two following cellular DNA repair mechanisms: non-homologous end joining (NHEJ), which gives rise to small insertions or deletions (indels), or homology-directed repair (HDR), which can integrate an exogenous donor DNA at the cut site.(1) As the NHEJ is the primary pathway occurring after DSBs, indels represent a major problem for precise gene-editing. In 2016, Dr. David Liu and collaborators proposed an alternative technology for precise point mutation: base-editing (BE), which consists in the conversion of a single nucleotide without forming DSBs.(2) Additional studies showed that this approach, although very efficient for some mutations, has its limitations.(3, 4, 5) Last week, a new study by Dr. Liu’s lab was given an accelerated preview release in Nature, offering yet another alternative to DSB-mediated modifications.(6) 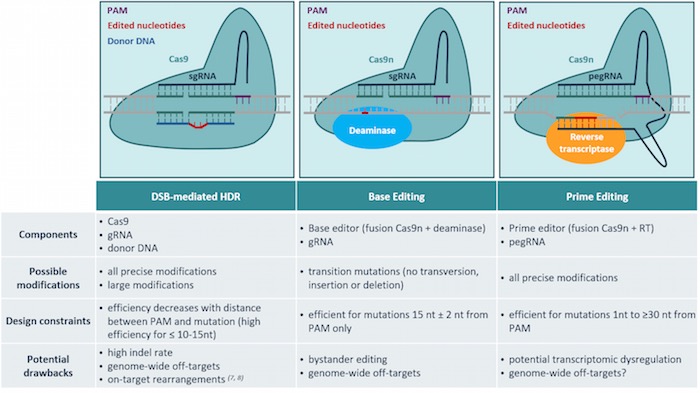 In this study, Dr. Anzalone and colleagues describe how they developed an all new Cas9-based gene-editing tool, prime editing, that allows efficient and precise modifications such as transitions, transversions, insertions, deletions, and combinations of these changes. This system requires a prime editor (PE), which consists of a Cas9 nickase fused to an optimized reverse transcriptase (RT), and two RNA molecules. The first one, called prime-editingguide RNA (pegRNA), serves as a structural scaffold for the Cas9 nickase and drives the enzyme to a specific DNA position, like any single-guide RNA (sgRNA); however, unlike the latter, it also acts as a donor and a template for the RT. The second RNA molecule is a sgRNA, and can be used to form a second nick on the opposite DNA strand to increase prime-editing efficiency. Summarized here is the sequence of events leading to prime editing modifications:

By getting rid of DSBs and donor DNA entirely, the authors appear to bypass, or at least strongly limit, the very unfortunate problem of indel-creation predominance (caused by NHEJ) over precise mutation insertion (typical of HDR). Prime editing, however, can only be used for rather small modifications (< 100 base pairs), and does not represent, therefore, an alternative tool for larger insertions or deletions.

This brand-new system represents the last and very promising addition to the Cas9-derived toolbox. Indeed, a major limitation of precise gene editing with BE or DSB-mediated HDR is that it requires the presence of a protospacer adjacent motif (PAM) in close proximity to the desired site of insertion of the mutation. Prime editing allows the insertion of the desired modification up to 30 nucleotides from the PAM sequence, representing, therefore, a tremendous improvement over existing technologies. Additionally, although RTs are known to be error-prone (ask any virologist), prime editing is more efficient than alternative technologies for precise gene-editing. It is still unclear, however, if prime editing can be efficient and reliable for homozygous modifications (i.e., targeting all alleles at once), which would represent another significant advantage over DSB-mediated HDR.

As mentioned by the authors, additional studies are still needed to fully determine potential genome-wide offtargets and physiological dysregulation caused by prime editing; nonetheless, this system could become the go-to technology to correct pathogenic mutations. Although not yet in its prime, this system represents a new promising tool for precise gene-editing.

Alessia is scientific communication manager at genOway
Amélie is an innovation expert at genOway, specializing in advanced biotechnologies