It’s been almost 6 years now since the gene-editing community was shaken by the transformation of a bacterial adaptative immunity system into a most elegant gene-editing tool, CRISPR. Even non-specialists have heard of this system that allows specifically targeting a DNA sequence for DSB (double-strand break), using a single enzyme and an RNA molecule.

This promising tool has since been extensively used and many labs, including ours, have contributed to its improvements and optimizations. The efficiency of cutting as well as the limitation of off-targets have focused a lot of attention, leading to the development of improved CRISPR enzymes and optimized algorithms for guide RNA design.

Interestingly, its efficiency has not been thoroughly compared to homologous recombination (HR) in cells that allow it, i.e., embryonic stem (ES) cells. More recently, several studies have indicated that using CRISPR may lead to complex, unpredicted modifications at the targeted locus. 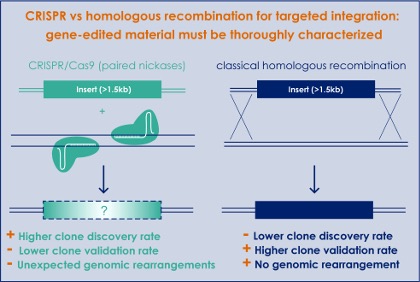 This large-scale study showed that although CRISPR/Cas9 allowed for the detection of more clones, classical HR was eventually more efficient for the generation of validated recombinant clones.

Interestingly, we also identified that CRISPR/Cas9-mediated gene editing repeatedly led to unpredicted on-target genomic rearrangements. It is, to our knowledge, the first large-scale study to include in-depth on-target characterization of CRISPR-edited materials.

Our study, along with our previous work (1), confirms that CRISPR/Cas9 is highly efficient for the production of edited clones, also underlining the capital importance of thoroughly characterizing all materials obtained with this technology for potential off-targets, but also at the targeted locus.

Amélie is an innovation expert at genOway, specializing in advanced biotechnologies