You are here
Home
>
Case Study
>
Rat models: The case of BMPR2

The choice of an animal model is key to make preclinical data more reproducible and translatable to the clinic. However, not all models are created equal, and so it is of utmost importance to define a specific question and ensure that the chosen model is fit for purpose. For many years, mice have been the preferred model for biomedical research, because they are easier and more economical to develop than rats. With the advent of technologies such as CRISPR/Cas9, things have changed, and rats have again become the laboratory animals of choice to study a wide variety of diseases, especially those where they more closely mimic the phenotypes observed in patients.1,2 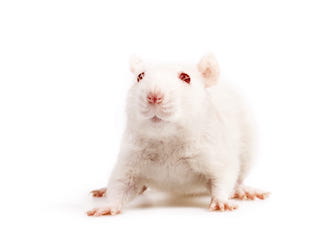 This is the case with pulmonary arterial hypertension (PAH), a rare, progressive disorder resulting from a reshaping and thickening of the walls of small pulmonary arteries, and leading to an increased blood pressure in the lungs (hence its name). Interestingly, about 75–80% of patients develop idiopathic PAH (i.e., of unknown etiology), while the remaining 15–20% have heritable forms of the disease mainly associated to heterozygous germline mutations in the gene encoding the bone morphogenetic protein receptor type II (Bmpr2).3 Either loss of function or decreased BMPR2 expression appear to be sufficient to develop PAH; however, the disease can be more or less severe depending on the type of mutation identified within Bmpr2 coding sequence: those leading to protein truncation are responsible for more serious symptoms than those impairing its expression.4

Over time, researchers have generated several mouse and rat models to study the functional consequences of the range of BMPR2 mutations associated with PAH. As a result, scientists today have access to a variety of rodent models of PAH, such as Bmpr2 conditional Knockout (KO) mice and rats, as well as mice harboring truncated forms of the protein. However, not all of them are suitable preclinical models: Bmpr2 KO rats develop moderate PAH associated with significant pulmonary vascular remodeling, more closely recapitulating what observed in human patients.5–7

The optimized translatability of this model, coupled with some intrinsic characteristics of rats, such as their larger size, make these animals invaluable tools not only to better understand PAH but also to generate other genetically modified models of the disease.1 genOway, a pioneer in the development of genetically modified rats,8 builds on its decades-long expertise in designing and producing relevant preclinical models to provide innovative rat models to the scientific community.