You are here
Home
>
Commentary
>
New doors to treatments for obesity

Brown adipose tissue (BAT) functions as a biological furnace that warms the body by consuming circulating glucose and lipids. To our placental ancestors, this thermogenic (i.e., heat-producing) process provided a selective advantage to leave the dark underground and enter surface habitats; for modern humans, however, it may represent a real panacea to two major causes of death: overweight and obesity.1 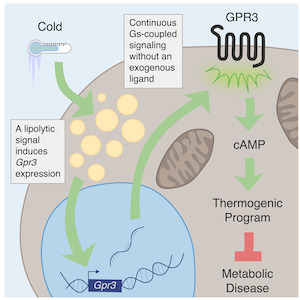 BAT thermogenic catabolism is activated by G protein-coupled receptors (GPCRs), a large group of cell surface receptors that responds to a variety of external signals such as peptides, carbohydrates, and lipids.4 For many years, it was believed that GPCRs could modulate intracellular signaling only upon binding to one of such molecules: a recent study conducted by a group of scientists at the Novo Nordisk Foundation has proven this belief wrong.5–7

In their paper, recently published in Cell, Olivia Sveidahl Johansen and colleagues unveiled what is indeed a new mechanism to activate the G protein-coupled receptor 3: GPR3. More specifically, they found that GPR3 possesses an innate signaling capacity (i.e., it does not require any exogenous ligand), it is constitutively active, and its expression is increased by cold exposure. Importantly, the authors also showed that GPR3 activation in BAT counteracts metabolic disease: this was elegantly demonstrated by using genetically engineered mice overexpressing GPR3 in thermogenic adipocytes, continuously fed at high caloric diet. Surprisingly, the authors found that increasing GPR3 expression in BAT is alone sufficient to drive energy expenditure and counteract metabolic disease in mice, opening new doors to potential novel treatments against obesity. Of note, the genetically engineered mice used in this study were generated by genOway, designer and provider of multiple preclinical models in several research areas, including immuno-oncology, metabolism, cardiovascular diseases, and neuroscience.