Generation of co-expression and/or reporter models

The IRES (internal ribosome entry site) allows the researcher to co-express several genes under the control of the same promoter. Within the past decade, the IRES has been used to develop hundreds of genetically modified models, and is considered to be the "go-to" technology for transgene co-expression in rodent animal models. 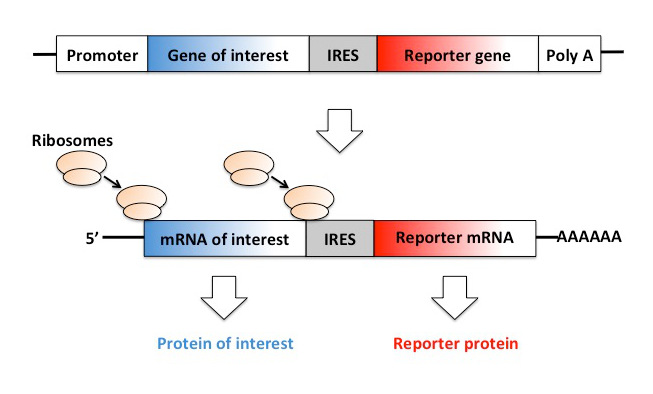 The IRES has been successfully used to generate models that mimic various human pathologies. Several cDNAs can be expressed under the control of the same promoter. This results in the co-expression of these genes in the same cells or tissues.

The IRES can be utilized to insert a reporter gene at the 3’ UTR of the gene of interest. Upon activation, the mRNA comprising the construct IRES-reporter-target gene, is translated as two independent proteins.

The reporter allows the researcher to quantify the gene expression level, to track the cells expressing the gene of interest, and to monitor the regulation of the gene. Historically, such models have been generated, for example, to quantify the effector function of regulatory T cells (see case 1 below), to quantify cytokine production, to follow cytokine-producing cells temporally, and to visualize a particular odorant receptor in olfactory neurons (see case 2 below).

A) A modified mouse Mcm3 allele was designed with loxP sites flanking exons 14–17 and a luciferase reporter inserted at the 3' UTR under the control of an IRES element. The resultant allele (Mcm3-lox) was intended as a conditional KO, as Mcm3 expression could be ablated with Cre recombinase.

B) Expression of Mcm3-lox could be monitored by the bioluminescence activity associated with luciferase expression. 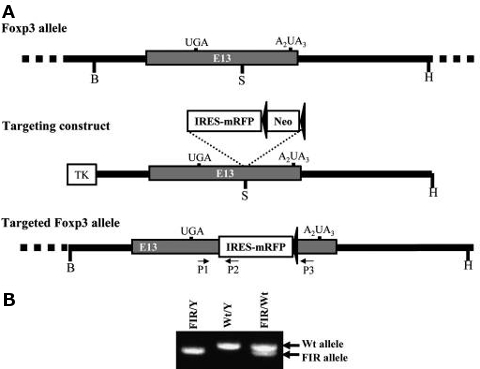 A) Maps for mouse Foxp3 locus, targeting DNA construct, and the targeted Foxp3 locus. An 11-kb mouse genomic DNA, including exon 13 of Foxp3 gene, was excised by using BstZ17I (B) and HpaI (H) (Figure 1, top) and cloned into pEasy-Flox vector adjacent to the thymindine kinase (TK) selection marker. A cassette containing IRES-mRFP and loxP-flanked neomycin (Neo) selection marker was inserted into an SspI (S) site between the translation stop codon (UGA) and the polyadenylation signal (A2UA3) of Foxp3 gene (middle). A correctly targeted ES cell was used to create chimeras and germ-line-transmitted mice. The Neo gene was removed in vivo by using deletor mice transgenic for Cre recombinase to generate mice bearing targeted Foxp3 locus (lower).

Peripheral lymphocytes from FIR mice were harvested and stained with fluorophore-conjugated anti-CD4 and anti-CD25 antibodies. mRFP expression in CD4 T cells was monitored by flow cytometry (left). RNA was extracted from different populations of peripheral CD4 T cells (as indicated) purified from FIR mice by FACS. Relative mRNA levels of Foxp3 were determined by TaqMan real-time quantitative PCR, and the combined results of two experiments were plotted.

IRES insertion at the 3' UTR of the gene of interest allows us to develop models for cell lineage tracking. Researchers may use these models to investigate and analyze the spatiotemporal cell fate of given cell populations.

Figure 1. Generation of mice expressing EGFP and Cre-ERt2 from a single bicistronic message by gene knock-in into the first exon of Lgr5. 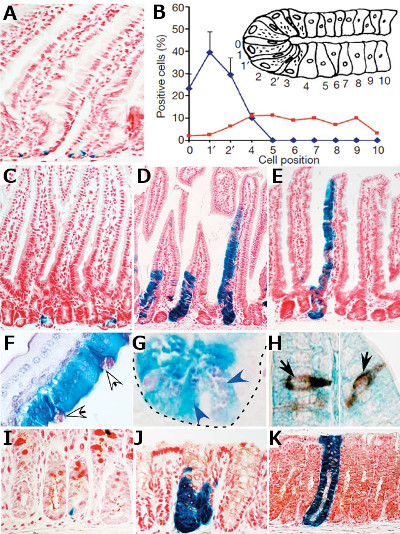 Figure 2. Lineage tracing in the small intestine and colon.

B) Frequency at which the blue cells appeared at specific positions relative to the crypt bottom, according to the scheme in the inset. Most of the Cre1 LacZ-labeled crypt base columnar (CBC) cells occurred at positions between the Paneth cells, whereas only 10% of these cells were observed at the 14 position directly above the cells (blue line). Quantitative data on the position of long-term DNA-label-retaining cells obtained in adult mice after irradiation (marking the "14" intestinal stem cell) were published recently (Potten et al. J. Cell Sci. 2002). The graph shows a comparison of these data (red line) with the position of CBC cells carrying activated Cre.

These systems allow the researcher to monitor gene expression patterns and gene regulation in various tissues and cells.

genOway provides access to more than 10,000 ready-to-use mouse models from EUCOMM. Among those, 1200 phenotyped lines have been aligned to human diseases related to immunology and inflammation, immuno-oncology, metabolism, neuroscience, pain, and cardiovascular- and musculoskeletal-based diseases.

Check if your favorite gene is listed among the models available at genOway.

The IRES is often used for the generation of Knockin Cre driver lines. The Knockin approach allows the driver line to faithfully mirror the expression pattern of the selected Cre expression locus.

The IRES sequence preserves expression of the target gene or allows the co-expression of a reporter gene. The reporter can provide information on expression level or on the expression pattern of Cre recombinase. 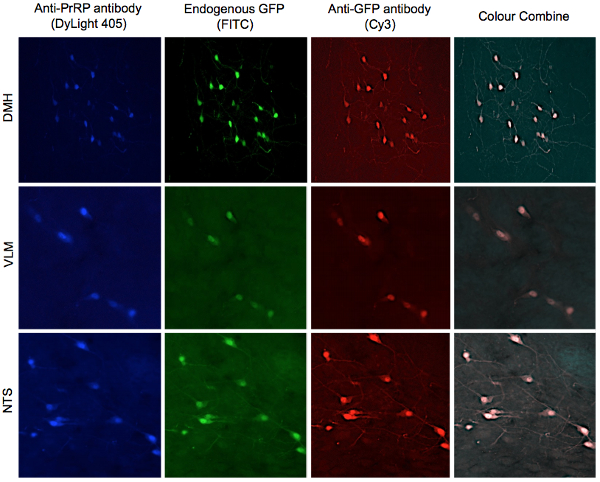 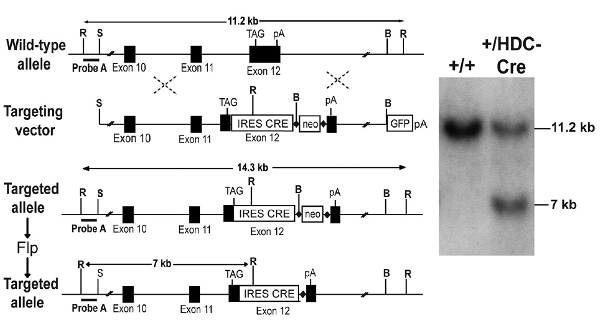 The IRES-Cre cassette was placed into exon 12 of the hdc gene, between the stop (TAG) codon and the polyadenylation (pA) signal. An FRT-flanked neomycin resistance gene was inserted downstream for positive selection in ES cells. For negative selection, we used a GFP-expressing gene, which flanked the 3 homology arm, and analyzed nonfluorescent colonies. After successful targeting, the neomycin cassette (Neo) was removed by FLP recombinase to give the final targeted allele.