You are here
Home
>
Case Study
>
Rat models: The case of CD89

When Rat Models Could Provide Optimized Translatability: The Case of CD89

Preclinical models’ relevance and physiology are of utmost importance to increase translatability. As far as rodent models go, mice have taken the No. 1spot, mainly for technical (and financial) reasons, mostly because genetic modifications are easier in mice than other rodents. However, the rat is now making a comeback, especially with the development of CRISPR technology. There are a number of reasons why rats may be preferred to mice, one being that the human gene of interest presents a homolog in the rat, but not in the mouse. This is the case for the IgA Fc receptor CD89, also known as FcαRI. 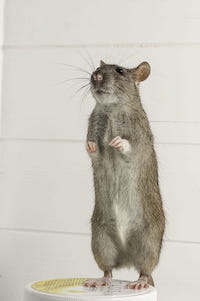 CD89 is a member of the Fc receptor immunoglobulin superfamily. Together with its ligand IgA, it is involved in host–pathogen defense. Indeed, CD89 binding by IgA complexes induces pro-inflammatory responses, leading to the elimination of pathogens. Additionally, CD89 may also play a role in maintaining homeostatic conditions. In humans, CD89 is expressed at the surface of myeloid cells such as neutrophils, monocytes, macrophages and eosinophils. Due to its role in mediating immunologic responses to pathogens, CD89 is a therapeutical target of interest for allergy and inflammation, but also cancer.1 Relevant preclinical models humanized for this target thus represent useful tools for the study and development of therapeutics.

Interestingly, there is no CD89 homolog in the mouse. In this species, CD351 is the only receptor known to bind IgA. Mouse models have, nevertheless, been developed to express a human CD89.2-4 Although these models proved very helpful for the study of IgA/CD89 binding mechanism of action and involvement in some pathologies, they all show either a phenotype2 or incomplete expression profile and function.3-6 When looking for alternative models, the rat could be of particular interest, as a CD89 homolog was described in this species.7 Although CD89 expression is still poorly documented in rats (one RNA-Seq study suggests that it may be expressed, albeit at low levels, in the spleen and lung,8 and its expression was confirmed in eosinophils9), it is a relevant alternative model to the “CD89-less” mouse.

As of today, there is no available CD89 rat model, but a knockout model has been developed and should be published soon.10 Considering the inherent characteristics of this species, genetic in this case, a humanized rat model could display optimized CD89 expression profile and function, thus providing improved translatability.