Key references substantiating the improvement of the Tet technology

The Tet gene expression system functions when a recombinant tetracycline-controlled transcription factor (either tTA for Tet-Off or rtTA for Tet-On) binds to the Tet-op promoter, subsequently driving the expression or controlling the inhibition of the target gene (see figure below).

Gene expression is regulated by the presence or absence of tetracycline or one of its derivatives such as doxycycline. Tetracycline binds directly to the transcription factors. 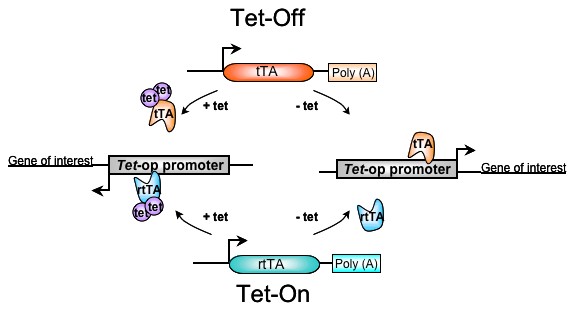 Tet-Off system: tetracycline prevents the tTA transcription factor from binding DNA at the promoter. Gene expression is inhibited in the presence of tetracycline.

Tet-On system: tetracycline binds the rtTA transcription factor and allows it to bind DNA at the promoter. Gene expression is induced in the presence of tetracycline.

Learn more about the science and technology of the Tet system.

genOway holds a worldwide license on the Tet system for research and model creation.

You, the customer, are granted a permanent, non-exclusive and royalty-free license for the patented and/or proprietary technologies employed to create the rodent model. This guarantees you full rights to use such a model for any and all R&D purposes.

You also retain ownership of the deliverables and can patent the model developed. genOway has no claim on the results generated using the model we provide for you.